• Informal markets are important conduits for underground economies. They operate on the basis of cash and sometimes barter and outside of official oversight.

• Officials are working to bring larger swaths of these underground economies into their tax revenue nets and to drive economic growth.

For the last three decades, Shabbir Khan and his brother Rahim Khan have made a living in Pakistan selling all kinds of items. Working in markets in Karachi, Pakistan, they sell shoes, knives, glasses, electronic gadgets, cameras, mobile phones, clothes, anything, really.

“You just name it, we can bring it for you,” said Shabbir Khan.

Among their inventory are a number of items that were originally made exclusively for NATO commandoes. Shoes made for soldiers sell well. Sales are not really on any accounts or taxed. They are part of an underground economy in Pakistan and developing countries that makes it possible for those societies to function. Similar parallel economies exist in most countries, but they are particularly important in developing economies.

“All these things are smuggled from Afghanistan via the Durand Line (along the Torkham border),” said Khan.

Tapping into the underground

The brothers sell their wares most Sundays in markets that pop up in local parks and empty lots in Karachi. Almost anything can be found in these markets: digital cameras, laptops, exercise machines, drone cameras, pianos, watches, clothes, toys.

“This illegal market is organised with the help of local police and the metropolitan administration. Every vendor gives 1000 rupees (around US$7) for each stall and people come here freely to buy whatever they want,” said Rahim Khan.

For residents of Karachi, the markets are a lifeline to items that might otherwise be impossible to find or prohibitively expensive.

But tapping into this underground economy in Pakistan and developing countries is not easy.

“In these markets you can find good quality very cheap but you have to be a good searcher and have the ability to bargain,” said Rabia Shah, another frequent customer.

Noor Muhammad and his wife are regulars at these markets. 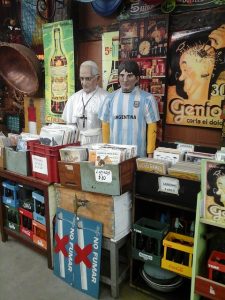 “We have found western crockery, clothes and glass items. Once we found a US$100 bill in a pocket of a pair of jeans we purchased here,” she said. Sometimes we give our old clothes instead of money to buy products as well.”

This kind of barter is part and parcel of the underground economy at play in Karachi’s markets.

This type of underground economy exists in many places. Far from Pakistan, in Argentina, there is a disassociation between the local peso and the dollar as well as economic issues related to corruption and lockdowns.

Similar markets exist in nearby Bangladesh. However, Bangladesh has been working hard to bring big chunks of these shadow economies into the light. Thanks to these efforts, it has pulled off something of an economic miracle.

In Pakistan, the markets are a practical necessity for residents. They also represent a huge loss of revenue for the government. The ability to avoid paying taxes is one of the big attractions of shopping in these markets that have become an institution in Pakistan.

Moving off the edge

Many buyers and sellers live on the very edge of financial stability. The markets make it possible to buy goods cheaply and avoid taxes. However, authorities do not and cannot track sales or earn tax revenue from all this underground economic activity.

“Pakistan is one of those countries in the world where people cannot trust their government. That is why the tax collection is always a major challenge for every government in Pakistan,” Shahid Hasan, one of Pakistan leading economists, told Anticentric.

The sheer amount and size of the underground economy in Pakistan and developing countries going through economic turmoil can be dizzying and the tax evasion that results from it can create real difficulties in funding social welfare programs or funding development programs.

Bringing all this underground economic activity into the real economy may be incredibly difficult.

Vendors and operators of underground markets work hard to stay under the radar of authorities, said Hasan. Purchases are done in cash or barter and much of what is sold in these markets has been smuggled.

In a very real sense, these markets exist to avoid taxes and regulations. They exist in a shadow economy without government oversight. All the related economic activity does not generate tax returns or appear in official statistics.

“The underground economy flourishes when cash transactions such as construction, illegal sales, smuggling and drug trafficking are common,” said Riaz Andy, a business and economics journalist.

“High tax rates, recession, high unemployment and negative public attitudes towards government and taxes are some of the factors that lead to the spread of the underground economy, tax evasion, as well as tax avoidance. The existence of a large underground economy results in high tax rates, reduction in government services, unfair competition, and an uneven playing field for honest business. Mainly self-employed persons are involved in tax evasion and underground economic activities because there is no formal system of documentation for self-employed persons and their activities.”

The thing is, most of the people that tap into this underground economy are the worst off.

“It’s a poor people market. Mostly vendors selling fake and counterfeit items,” said Waseem Ahmed, a revenue officer at the Karachi Metropolitan Corporation. Authorities are aware of these markets and generally turn a blind eye, although they do occasionally raid them.

These markets are likely to remain a staple of Pakistan and other developing economies for quite some time. At the end of 2019, Pakistan’s GDP per capita was US$1,285, according to The World Bank, about a tenth of the global number of US$11,429. By comparison, China’s GDP per capita is US$10,261 and Canada’s is US$46,197.

But Pakistan wants to focus on economic growth.

“The government believes its economic policies have already started showing signs of stabilization. It believes its policies will put the country on a sustainable growth and development path within 12 to 24 months in stark contrast to past growth spurts fueled by borrowed money and deficit financing,” said Minister for Revenue and Economic Affairs Hammad Azhar.

One prong of these efforts is to bring larger swaths of these underground parallel economies into the light and boost tax revenues. This could, in turn, facilitate a virtuous circle of development and growth.

This year, the number of new registered taxpayers touched a record high of 2.7 million. But tax collection has stalled due to the COVID-19 pandemic and resistance from those that rely on the underground economy, Azhar added.