Social unrest in Mozambique has led to staggering numbers of displaced people, hunger and violence in 2020 and 2021 could be even worse.

The United Nations says that 1.1 million people will need help this year as a bloody insurgency expands, the impact of natural disasters remains a serious threat. As violence escalated through 2019, more than half a million people have fled their homes.

Mozambique is a country in southeast Africa with a population of 30 million. Mozambique is rich in natural resources, including oil and gas. Its coastal location and position in southwest Africa make it a possible restaging ground for militias, one with access to trade routes and a threat to the stability of the continent.

“More than 530,000 people are now displaced in Cabo Delgado, Nampula, Zambezia and Niassa provinces, according to official estimates, as numbers continue to increase daily,” said Babar Baloch, spokesperson from the United Nations High Commissioner for Refugees (UNHCR), during a Dec. 18 press conference in Switzerland. “More than 2,000 people have been killed since the conflict started in 2017. In the violence houses have been looted and burned, families separated and health centers and schools seriously damaged.”

The world has paid little attention to Mozambique’s fight against Ansar al-Sunna, an Islamic group founded in 2015 that is linked to Daesh, also known as ISIS or ISIL. The militias are fighting for control of the northernmost province of Cabo Delgado. They have already taken control of part of the territory and are not enforcing Sharia Law.

“Radical Muslims from Kenya and Tanzania are transforming a low-intensity ethnic rebellion into an Islamic jihad against Mozambique’s central government,” tweeted Thomas Gallagher, emeritus professor of politics at the University of Bradford. “A Sharia Emirate this far south, poses an unsettling threat to southern African stability.”

The International Rescue Committee lists the situation in Mozambique as one of the top ten humanitarian emergencies to watch, pointing out that the number of people in need doubled through 2020 and put the country in the agency’s Emergency Watchlist for the first time, right after Venezuela, Nigeria and South Sudan.

Daesh has had several setbacks over the past few years in the Middle East. Intelligence agencies say it is now operating along with Ansar al-Sunna in Africa and Mozambique has become a hotspot for their operations. 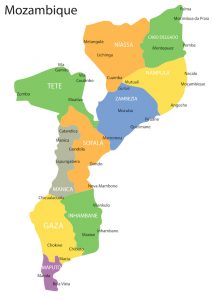 “Mozambique?is?increasingly exploited as a base of operations by transnational organized crime networks, as a transshipment point for illicit drug trafficking and international money laundering and is also a source and transit point for illegal logging and wildlife trafficking,” said the U.S. Department of State’s Bureau of International Narcotics and Law Enforcement Affairs.

Nathan Sales, the U.S. ambassador-at-large and coordinator for counterterrorism and special presidential envoy to the Global Coalition to Defeat ISIS, visited the African country in early December 2020 and shared his findings in a telephone call with journalists.

“We’ve seen ongoing violence in the northern Cabo Delgado province, and we’re concerned that this violence threatens the security of Mozambican citizens, threatens the progress of development, and has the potential to undermine the livelihoods of Mozambicans with significant commercial investments.”

“What we’ve seen is increased terrorist attacks by ISIS affiliates in Mozambique over the last three years, resulting in the deaths of more than 2,000 people.”

Uptick in violence from people and nature

The uptick in violence has resulted in massive displacement of people, mainly from the Cabo Delgado province, a region where researchers discovered in 2010 the third largest gas reserves in Africa.

The region has not only had to deal with the violence but now is also trying to recover from tropical cyclone Kenneth, the strongest cyclone ever recorded in Mozambique. Kenneth hit the northern province of Cabo Delgado, an area where no cyclones have hit at least since satellite tracking.

Kenneth was a Category 5 storm that hit the country in April 2019. It was the strongest storm ever to make landfall in Mozambique. It caused widespread flooding and catastrophic winds

“This has only aggravated a situation that is now complicated by the spread of terrorism that is reaching them from the north, from Somalia,” said Josep Borrell, high representative of the European Union in remarks to the European Parliament.

“The situation in Mozambique is deteriorating as natural disasters hit and the country copes with extremely serious government difficulties,” he said.

According to Borrell, the EU donated EUR37 million this year to Mozambique to face its many challenges, mainly at Cabo Delgado.

As the rainy season picks up in this costal country, the challenges will get worse. A quarter of a million children are at risk of deadly diseases other than COVID-19, according to UNICEF.

The Covid-19 pandemic has added to the social unrest in Mozambique. It is taking a toll on the country’s economy, despite a relatively low number of reported cases.

It ranks 177 out of 220 countries worldwide in terms of cases per million with 19,500 cases and about 171 cases by Jan. 4, according to Johns Hopkins University.

The pandemic could further damage an already devastated economy. Output was on track to contract by 2 percent last year, said the African Development Bank Group in a May report.

The history of the country is steeped in violence. The country’s flag includes an image of an AK-47 with a bayonet is a testament to that history. It was adopted in 1983, in the midst of a bloody 15-year civil war that ended in 1992.

The current con
flict that started in 2017 is the most violent since the civil war. The Armed Conflict Location & Event Data project has reported 548 events in Mozambique, including 124 battles and 21 riots as well as 377 acts of violence against civilians in 2020.

Oscar Kimanuka, a political analysis in the capital of Kigali, told the Anadolu Agency that a big driver of conflict is unemployment among young people. Without jobs, the youth are more likely to take up guns.

“Youth redundancy and unemployment are major factors motivating them to join the rebels,” Kimanuka told the agency.

• Protests and social unrest simmer around the world