Protests and killings continue to define life in Myanmar, with much of the trouble focused on the larger cities like Yangon and key regions like Rakhine, where the military has barricaded entire neighborhoods as part of an effort to contain the spread of protests.
Communications in and out of the country are generally blocked and internet access limited, but videos and commentary coming out of the country, often via mobile phone, include reports of multiple deaths and the military using live rounds on protesters.

The Strait Times, a newspaper in Singapore, reported on 11 March that six people were killed in the town of Myaing after forces fired on protesters. 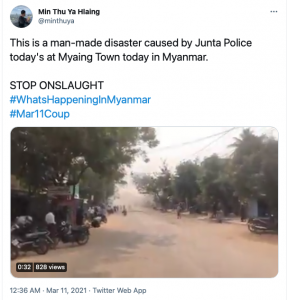 “This is not a war zone, but people are being killed by Junta Police daily as if we are at war,” twitted Min Thu Ya Hlaing, vice president at DBS Bank in Singapore, who describes himself as a banker turned activist joining the fight against the military dictatorship that has taken over the government of the Asian country. “When will these atrocities be end for Myanmar people? We have been suffering beyond words without any help!!.”

He also twitted a video that includes military using smoke on protesters and people moving away from it.

According to the Assistance Association for Political Prisoners (AAPP), a non-profit monitoring the events in the country, up to 2,045 people have been detained in relation to an attempted military coup that took place on February 1 and dozens more are being arrested every day by the military junta ruling the country.

“Approximately 200 protestors including students and youths were arrested during the crackdown across the country today,” AAPP said in a statement on March 11. “We will continue to investigate these and make appropriate announcements,” they said.

Meanwhile, the United Nations’ Security Council issued a statement regarding its concerns of unfolding events in the Asian nation.

“The Council (…) highlighted that the current situation has the potential to exacerbate existing challenges in Rakhine state and other regions,” it said. “It is vital that the rights of minorities are fully protected,” it added.

Some, like Min, doubt of the usefulness of the statement.

“The statement from Security Council is appreciated but not helpful to change anything on what’s happening at Myanmar right now!,” he said. “Nobody in Junta Terrorists Group care about statements simply because they are Terrorists. Nobody can negotiate with Terrorists,” he explained.

In Washington, D.C. the U.S. Department of State condemned what the military junta is doing in Myanmar.

“We are repulsed by the military regime’s continued use of lethal force against the people of Burma,” said Ned Price, spokesperson at the U.S. Department of State. “We strongly condemn the use of violence by Burmese security forces against the Burmese people, including peaceful protestors, journalists, and civil society,” he said.

Meanwhile, the military junta that took over the country on 1 February 2021 after losing out in democratic elections, is increasing the number of accusations against former state counsellor Aung San Suu Kyi. The military first arrested Suu Kyi in relation to what it said were smuggled walkie talkies and now says she accepted illegal payments worth as much as US$600,000 and as much as 12 kilograms of gold. The complaint was attributed to Phyo Mien Thein, former chief minister of Yangon.

The military accused various members of the previous government of corruption.

In As the world condemns violence taking place in the streets of Myanmar, while people in the country take on the streets, the military junta accesses former president and Nobel laureate Aung San Suu Kyi for having received up to $600,000 and almost a dozen of kilograms of gold in a corruption scheme.

Speaking during a press conference, the junta’s spokesperson Brigadier General Zaw Min Tun said the military had hired a lobbyist to address a misperception among the international community that the military is using excessive force.

Dozens of people have been killed, with unverified reports suggesting that at least 34 protesters were killed just on Wednesday, 3 March 2021 and another 18 people on 28 February.

Less than a quarter of 47 protesters arrested in mass raids in Hong Kong on 28 February were granted bail by the High Court. The court granted bail to just 11 of the protesters charged under China’s new national security law.

The Department of Justice of the Special Administrative Region of China appealed the bails and was successful in the case of former lawmaker Helena Wong, who will remain behind bars.

On 2 March, police carried out the 100th arrest under the controversial national security law, which some experts claim, goes against the agreement between the U.K. government and Beijing, when the territory was returned to the People’s Republic of China in 1997. Authorities in Beijing and Hong Kong says the law and arrests have been key to doing away with the months of unrest that rocked Hong Kong in 2019, before COVID-19.

Pro-democracy protesters took to the streets of Thailand on Saturday, 6 March, to shine a spotlight on the detained leaders of a student-led movement.

The Associated Press reported that the protests were peaceful and held in multiple sites across the country. The main protest was led by REDEM (Restart Democracy), a faction of the student-led anti-government movement.

An earlier protest led by REDEM in Bangkok on Sunday, 28 February, calling on King Maha Vajiralongkorn to give up command of an army unit resulted in violence and chaos, with police using tear gas and water cannons against protesters that threw bottles.

Celebrations to mark International Women’s Day on 10 March ended in social unrest and even violence in various places.

In Bogota, Colombia’s capital, women hit the streets. City authorities said about 200 of them attacked the city’s public transportation system, tried to set fire to a church downtown and attacking a commercial area near Bolivar square, at the heart of the city. Riot police were deployed, but no arrests were reported.

Paraguay: Minister of Health in focus

Paraguay’s Ministry of Health Julio Mazzoleni was forced to resign after mass protests erupted across the country against his performance and poor handling of the COVID-19 pandemic, which has been raging out of control in the Latin American country.

“It is a time when it is absolutely necessary for Paraguayans to be united to fight the pandemic and for anyone there is the national interest,” Mazzoleni said while announcing his resignation. “Hopefully, this decision will serve for the union of the country.”

Paraguay, which has a population of about 7 million, has only received about 4,000 doses of the Sputnik V the small nation has only received a batch of 4,000 Sputnik V vaccine from Russia even though the country has reported 174,000 infection and almost 3,400 deaths, according to the Johns Hopkins University of Medicine COVID-19 tracker.

Protest continued to rock Chile and 63 people were detained on Friday, 5 March in the capital of Santiago during a protest against President Sebastian Piñera’s government. A military statue was set on fire during the protests.

“I strongly condemn the affront to the statue of the General Manuel Baquedano, of the Chilean Army,” said Chile’s Ministry of Defense Baldo Prokurica. “Violence and intolerance have no place in a democratic society and must be condemned and rejected with all force.”

Piñera’s government has been the focus of protesters for months. Their demands include broad-based economic reforms to address inequality. Protesters also want electoral reform to include more people in the electorate.

Cases stemming from protests through the summer of 2020 in the U.S. continue to make their way through the courts.

On 8 March 2021 a journalist facing charges from her coverage of a protests in the state of Iowa in 2020 is now going to trial. Andrea Sahouri, a reporter at the Des Moines Register, was pepper-sprayed and jailed during clashes between protesters and police in May 2020.

The US Press Freedom Tracker has not recorded any other trials of working journalists since 2018 but does note that 130 were arrested or detained in 2020 and three so far in 2021.

• Social unrest in Mozambique: Half a million displaced