Chinyu Lin lives in Taiwan where he studies accounting and enjoys listening to the band Mayday. Things are generally OK for the 20-year-old… except for the fact that he is gay. Even here, in a relative oasis of nondiscrimination, the LGBTQIA+ community has seen limited progress towards equal rights and social acceptance.

Taiwan may represent the high-water mark of equality for LGBTQIA+ communities in Asia. Elsewhere, conditions are much worse and the discrimination more extreme. In January 2021, two gay men were lashed 77 times each after a mob of vigilantes raided their home in 2020. In Hong Kong, which was set to host the Gay Games, politicians have gone on the offensive to block the event. Singapore has refused to strike down a law that makes homosexuality illegal. In South Korea and China, members of the LGBTQIA+ community are often social outcasts. Japanese society remains very conservative. In places like Pakistan, Iran or Afghanistan, members of the LGBTQIA+ community face death on any given day.

Across Asia, a continent that is home to almost two thirds of the people of the world, being gay remains a significant barrier, sometimes a deadly one. Widespread and legal discrimination are not only commonplace but accepted.

This is true even in Taiwan, arguably one of the most open-minded places in the region. Discrimination towards the lesbian, gay, bisexual, transgender, queer (or questioning), intersex and asexual community that has come to be known as LGBTQIA+ remains widespread. Equality is not in the books and attitudes are not conducive to legal or social change.

Living in Taiwan allowed Lin to come out to friends while in high school (something that would be unthinkable in Pakistan or Afghanistan), but his family still does not know he is gay. They would not be likely to accept it or him, Lin said.

All things considered, Taiwan is a relative oasis of acceptance in a region were oppressed LGBTQIA+ communities have seen little progress.

Taiwan was the first place in Asia to pass marriage equality legislation in May 2019. That legislation gave same-sex marriages validity. By the end of 2020 there were 5,326 married same-sex couples in Taiwan, which has a population of about 24 million. Canada, by comparison, has a population of about 38 million, adopted same-sex marriage as far back as 2005 and is home to more than 24,000 married same-sex couples.

Members of the LGBTQIA+ community like Lin often find themselves hiding their sexuality, assuming, perhaps rightly, that they will not be accepted. Even in places like Taiwan where the law has started to accept, societal discrimination remains rife.

As Lin’s unwillingness to come out to his family shows, this lack of acceptance has a real and direct impact. 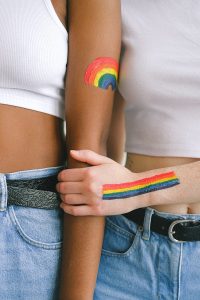 In Japan, 8.9 percent of 60,000 respondents to a 2018 survey by the Dentsu Diversity Lab of people aged between 20 and 59 identified as LGBT. There are 125 million people in Japan. Assuming a similar percentage across the population would mean that there are more than 11 million LGBT people in the hyper conservative country.

In India, which has a population of about 1.3 billion, polling agency Ipsos sampled 500 people in 2021 and found 3 percent identified as homosexual, 9 percent as bisexual, 1 percent as pansexual and 2 percent as asexual. That could add up to between 120 and 130 million people if those percentages hold across the entire population. Here again, an oppressed LGBTQIA+ community has seen little progress.

According to a research article called “Sexual Orientation, Controversy, and Science” published in 2016 in the journal Psychological Science in the Public Interest, 1.5 percent of men and women identify as bisexual, 1 percent as mostly homosexual and 2.5 percent as completely homosexual. That would be around 5 percent of the entire population of India.

Back-of-the-napkin math based on the limited data and surveys that exist, suggests that the LGBTQIA+ communities between Asia’s western border with Europe and the far reaches of Japan or Indonesia could include as many as about 225 million people.

Things not getting better anywhere

There is little reason to think that things will get better for the community any time soon. Even countries and regions generally regarded as LGBTQIA+ open or even friendly have shown themselves hesitant to take significant steps towards greater rights for the community, much less equality.

Even the simplest debates about the rights of the community can stretch over years and generally take a back seat to other issues. In the Philippines, Cambodia or Laos, the rights of the community are secondary to the demands of development and growth. Political stability is much more important in Hong Kong or mainland China. Indonesia or India, cater to conservative religious populations.

In Hong Kong, an anti-discrimination law for the LGBTQIA+ community has been in discussion for almost 30 years, since it was first floated in the 1990s. It has never become a priority for the city’s Legislative Council (LegCo).

Some places simply ignore the issue.

In Singapore, Section 377A of the Penal Code, which makes consensual sex between two males a crime, is still in the books. The government has said it does not plan to enforce it, essentially maintaining the status quo and avoiding dealing with the issue.

Talking about whether Section 377A will ever be abolished, June Chua, the founder and executive director of the T-Project, a group that runs the first and only shelter for homeless transgender women in Singapore, would only say “hopefully in my lifetime.”

Elsewhere, there is a little more hope, but not much more.

Thailand is working on a Civil Partnership Bill that would give some kind of legal protection to same sex marriages, or at least partnerships. Japan’s government Diet has proposed an LGBT equality bill that would allow for some progress towards acceptance. Unfortunately, both bills have hit roadblocks. As of July 2021, nobody was really sure when either of them would move forward or if they would become law.

Most of Asia is much worse for LGBTQIA+ people.

Homosexuality is illegal in many places. In some, like Afghanistan and Iran, it is punishable by death.

In Malaysia, a sexual connection between two males or between two Muslims of the same sex is illegal. Same sex marriage or equality are not in the cards. MT Chin, a 21-year-old woman from the LGBTQIA+ community in Malaysia, said most of her homosexual male friends work very hard to keep their relationships secret because the danger is very real. MT Chin is not her real name, but the one she chose to use to protect her identity.

Other countries do not consider the LGBTQIA+ community to be outright illegal but that does not mean conditions are friendly, much less equal. Discrimination remains the order of the day.

In South Korea, workplace discrimination towards the community remains a serious issue and daily occurrence.

“Korea is not friendly at all to the LGBTQIA+ community as a country,” said one activist with Solidarity for LGBT Human Rights of Korea who goes by the pseudonym Osori.

Will time heal all?

The contrasts in the attitudes across Asia and places like Western Europe, North America or even Latin America are stark.

Still, there are those that hold on to hopes of progress.

Lin, in Taiwan, is among them. He is generally positive about the future development of LGBTQIA+ rights but is also aware that progress is on pause. Any work on same-sex marriage legalization in Taiwan has encountered barriers, Lin explained. “The government does not make any moves these days because they have to focus on the serious pandemic situation.”

Still, Lin has held on to hope that, at some point, equality legislation will become law. “I believe it only needs more time.”

This is Part 1 of a seven-part series exploring the challenges and dangers that LGBTQIA+ communities face throughout Asia.