Oppressed LGBTQIA+ communities in Asia have little respite. Thailand, Hong Kong and Japan often top the list for “most gay friendly in Asia” on ranking websites like Rainbow Nations or Nomadic Boys, but these accolades are somewhat deceiving. A more accurate description would be to rank them as the most likely to “not penalize people for being homosexuals”.

A careful look suggests that progress towards greater inclusion for LGBTQIA+ communities, even in these most open of places, has generally stagnated. For Asia’s oppressed LGBTQIA+ communities, discrimination remains the order of the day, even at the political level. This reality begs the question, are these places as gay friendly as they are assumed to be?

Taylor, a 20-year-old homosexual man from Hong Kong who prefers to use a pseudonym, agreed that Hong Kong is relatively friendly to the LGBTQIA+ community and, in general, people are more open-minded. However, there is still discrimination towards the community from just about every segment of society and across the spectrum of political leaders. Taylor said that the lack of supporting policies for the community is a key concern.

In 2022, Hong Kong will be the first city in Asia to hold the Gay Games but during the discussion in the city’s Legislative Council (LegCo) about how the events would be held, “there were some inaccurate comments from public figures which were not truthful at all,” said Taylor. “This made me feel discriminated against and offended.”

One such instance was on June 9, 2021, when lawmakers were discussing the Games during a session of LegCo. Junius Ho, a pro-establishment lawmaker, commented that “it is your business what you do in your own room, but if you go out and do it in public, it’s disgraceful.” He responded to the prediction that the competition could bring in more than US$125 million in revenue to the city by saying: “I don’t want to earn this type of dirty money, it doesn’t matter if we earn the one billion (Hong Kong) dollars.”

“I think an anti-discrimination law is most important and urgent,” said Taylor.

An anti-discrimination law has been discussed since the 1990s and discussions continue, with little actual movement or progress.

“The anti-discrimination law has remained as a proposal for too long. The government should push it further and implement the ordinance quickly,” Taylor said.

Oppressed LGBTQIA+ communities did get a bit of good news in the support from Hong Kong’s Equal Opportunities Commissions. The chairperson of the commission, Ricky Chu Man-kin, reaffirmed the need for legislation against discrimination on grounds of sexual orientation and gender identity in a series of media interviews on June 2021

However, as of mid-2021, the EOC was still getting ready to issue a public consultation on any such legislation – a very far cry from actually having any kind of law in the books. It will likely be many, many years before an anti-discrimination law that protects the LGBTQIA+ community becomes a reality in Hong Kong.

Ho Hon Sam, a commission spokesperson, said the commission is now studying how legislation could help end discrimination in areas such as employment, education and the provision of goods, services and facilities.

“We hope to complete the first draft of a legal study this year and then we could start to consult the public on the law,” said Ho.

The status quo is likely to last for quite a long time yet.

Thailand, another location generally considered friendly to the community, has taken some steps forward. Positive steps. The kind of steps that hold great promise of a future full of equality and less discrimination for Asia’s oppressed LGBTQIA+ communities. Unfortunately, here again, progress appears to stop just when it matters most.

Last year, Thailand’s cabinet approved a draft of a same-sex civil partnership bill and sent it to parliament, the last step before it could become law. If the bill does pass, it would allow same-sex couples to become “civil partners”, giving their relationship the protection of law and allowing them to enjoy rights similar to those of married heterosexual couples.

A lot of preparation went into drafting the bill. It has been drafted and redrafted several times since 2018. Despite all this thinking and writing, the bill has a lot of holes. For one, it does not cover everybody, leaving many members of the LGBTQIA+ community unlikely to benefit from the law. At the same time, the law does not cover some spousal benefits that heterosexual couples enjoy, like tax deductions or government pensions.

Unfortunately, after the bill was sent to parliament to turn it into law, it hit a major roadblock. Chompoonute Nakornthap, the policy adviser to the Social Development and Human Security Ministry, told the Bangkok Post newspaper that her team was asked by the government whips to review the bill. The whole thing seemed to be going back to the drawing board.

“This roadblock is indeed quite surprising,” said Ryan Figueiredo, the founder and executive director of the Equal Asia Foundation. The move will push back all the work done so far and delay the passing of this bill. It is unclear for how long.

“It is hard to say what prompted this response from the government,” Figueiredo said. “One thing is for sure, even if the bill was passed, it would exclude a number of people within the community from its benefits and there would be a number of implementation challenges.”

The bill could be resubmitted before the end of the year but this simply means that it coule be a long time before it becomes law. Still, Figueiredo prefers to look at the positive side things.

“Perhaps this roadblock is an opportunity to recalibrate and get more feedback, especially in the context of how LGBTQIA+ communities have been affected by the pandemic,” he said. “In the absence of social, economic and legal protections, their vulnerabilities are amplified. This contextualization might strengthen the draft bill and improve its chances of success.”

Singapore has some credentials to suggest a more inclusive society. This is where the Pink Dot event started. Pink Dot is an annual event to support the LGBTQIA+ community through inclusiveness, diversity and the freedom to love. Even though the now global Pink Dot started here, Singapore’s government remains very conservative and the city state has a complex and even passive-aggressive attitude towards its LGBTQIA+ community.

The most visible and significant example of how this plays out is the government’s refusal to cancel Section 377A of the Penal Code. To date, the section of law that makes it criminal for male adults to have sex and punishes the act with up to two years in jail remains in the books. In 2007, then Prime Minister Lee Hsien Loong said the government would not proactively enforce Section 377A but the law is still there, like a sword of Damocles hanging over the LGBTQIA+ community. It is another example of the reality that Asia’s oppressed LGBTQIA+ communities live with every day. 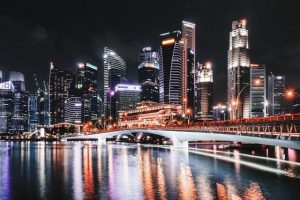 “This is an outdated, repulsive and totally redundant law in this day and age!” said June Chua, the founder and executive director of the T-Project, Singapore’s first and only social service for the transgender community

Every once in a while, the community in Singapore takes steps to show its opposition to the law. In March 2021, the law was challenged in three separate trials but all three were dismissed by a high court judge.

Not long after, the law was in the spotlight again, this time from what has become known as the Oogachaga webinar incident. On 17 May 2021, Oogachaga, a community-based organization that supports the LGBTQ+ community in Singapore, co-organized a webinar titled The Economic Case for LGBT Equality: Exploring Global Trends with Professor Lee Badgett. The event was organized alongside the US Embassy in Singapore. To Oogachaga’s great surprise, the government had a very strong reaction. The Ministry of Foreign Affairs warned the U.S embassy that “foreign missions here are not to interfere in ourdomestic social and political matters”. This was not a fight the US government wanted to pick.

The tough stance taken by the government once again raised concerns about the future standing of the community. A standing that, while generally better than elsewhere in the region, is under constant threat from Section 377A.

“The LGBT community in Singapore is still facing discrimination and microaggression every day,” Chua said. “There are no specific laws to protect us.”

In August 2021, Tokyo was the focus of global attention when it hosted the 2020 Tokyo Olympics. The event was held a year after it was originally scheduled, delayed by the COVID-19 pandemic. The focus on the games overshadowed the Japanese government’s hesitant attitude towards giving equal rights to the oppressed LGBTQIA+ community.

Japan’s hosting of the games may have helped, however. The Olympic Charter says that “every individual must have the possibility of practising sport, without discrimination of any kind and in the Olympic spirit.” With this requirement clearly outlined, Japan was set to pass an LGBT equality bill before the Games opened.

“It was a great step in the right direction for the government to even debate the issue. Until then the ruling government was not interested in talking about it,” said Olivier Fabre, who helps out Pride House Tokyo through his work as a multimedia freelancer. Fabre said the bill is important because many in the community still live in fear of being outed, kicked out of apartments, jobs, being bullied in schools or at work or of losing family support.

At the end of the day, Japanese society remains very, very conservative. In March, LGBT rights groups and human rights organizations submitted a petition with more than 100,000 signatures asking for the introduction of the LGBT Equality Act. Global firms like Coca-Cola, Microsoft and Deloitte also stepped up to back the proposed legislation.

But even with all this support, this promised anti-discrimination bill died before it was even born. The session of the Diet, Japan’s lawmaking body, in which the law was up for consideration, ended on 16 June 2021 without the bill passing, which meant that it was not likely to become law.

“We think it was very unfortunate as momentum had built up for its passing and there is greater public acceptance of the bill than in the past,” said Fabre. “It is a lost opportunity especially as the world’s eyes are upon Japan ahead of the Olympics.”

Fabre believes there is a small but growing number of supporters of the bill within the government and hopes things will change, but any change will take time.

“It will be harder for them to work on LGBTQIA+ rights after the attention of the Olympics is off Japan and without greater public interest. We are worried that we will be once again sidelined after the Olympics,” Fabre said.

It turns out, he was right.

The upshot is that even in Asia’s relatively gay-friendly jurisdictions like Hong Kong, Japan, Thailand and Singapore progress has been held up by conservative tendencies.

Hong Kong continues to debate and discuss and procrastinate. Singapore has kept a law that makes sex between men a crime. Japan basically stalled away any possible progress. Thailand keeps going back to the drawing board.

None of these places are as friendly to the community as they are generally perceived to be and, as all these recent developments suggest, there is little hope of progress in the near or medium term.

This is Part 2 of a seven-part series exploring the challenges and dangers that LGBTQIA+ communities face throughout Asia.