Pockets of acceptance for LGBTQIA+ have done little to do away with the widely pessimistic view of the future among communities in Asia, but there are tiny rays of hope. One place where this hope is alive and well is Taiwan, which is generally accepting of the community and moving forward in this area.

Another place that is generally accepting of the community is, perhaps unexpectedly, Cambodia.

Both these places offer lessons to the rest of Asia about how to create and adopt policies that can benefit the LGBTQIA+ community.

“There are many singers and key opinion leaders who support it publicly. For example, there is the song SEA You Soon by the singers Fish Leong Chui Pen and Eve Ai Yi-liang,” said Chinyu Lin, a 20-year-old homosexual man from Taiwan. “I am remaining positive and believe there is a high chance that the law will be passed.”

A transnational same-sex marriage law is an important issue for the LGBTQIA+ community because “the absence of transnational marriage protection created a daily struggle for a lot of couples,” said Nai-chia Chen, a research fellow at the Taiwan Equality Campaign (formerly known as the Marriage Equality Coalition Taiwan). The Campaign runs projects to create a discrimination-free society for the LGBTQ+ community.

A case in point, said Chen, is a German-Filipino couple which the organization helped. “One of them had been appointed by his company to work in Taiwan. The Filipino husband couldn’t receive a spouse visa because of the local laws. He also struggled to find a job in the country, without which he would have to leave. Each day spent in Taiwan was a countdown to separation.”

As luck would have it, the Filipino husband eventually found a job, but this is not the case for all transnational couples. Chen would like to see the proposed changes from the Judicial Yuan become enshrined in law and hopes that the court decision from May could lead to further changes.

Chinyu Lin also looks forward to greater gender equality in education in addition to hoping for the passage of the transnational same-sex marriage law and holding a positive view towards Taiwan’s future development on LGBTQIA+. Higher levels of education could prevent tragedies like the one that happened to Ye Yongzhi around two decades ago. Ye was a third-year junior high school student who had a distinctive gender temperament, according to his mother. He was bullied in school and eventually found dead in the school’s bathroom.

“I just don’t want to see the things that happened to Ye Yongzhi happen again,” said Chinyu Lin. In order to move towards greater gender equality education, “it is important for the public to understand that educating children about the different sexualities that exist is not the same as teaching children to be homosexuals.” 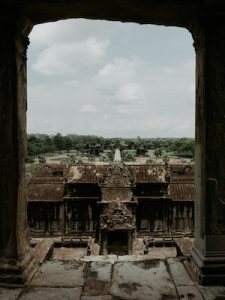 Cambodia does not have LGBTQIA+ rights legislation in its books but it is, relatively speaking, friendly towards the LGBTQIA+ community. The United Nations Development Programme’s 2014 report, “Being LGBT in Asia: Cambodia Country Report”, noted that pride events have been celebrated in the country since 2003. Even before that, in 2004, Cambodia’s late King Father, Norodom Sihanouk, publicly supported same-sex relations.

There is a growing number of organizations and activities supporting the LGBTQIA+ community, making Cambodia a place to find pockets of acceptance for LGBTQIA+.

“I can say the community in Cambodia is open, active, and still growing. The general public is aware of the community. They are very respectful, friendly, and open about it,” said Franco Dionco, a Filipino homosexual man who lived in Cambodia for a few years with his husband.

“I have never ever experienced discrimination in Cambodia. I remember working with transgender people, openly gay men and femme boys in my last company.”

According to a survey conducted by Domrei Research & Consulting in 2011, 65 percent of 1519 male respondents agreed that “there should be laws protecting gays and homosexuals from discrimination”.

Dionco pointed out that the friendliness of Cambodia might stem from the influence of neighboring countries like Thailand and Vietnam, where gay personalities are active in the media.

“Mostly, as a gay father who has kids, I just get annoyed every time my husband and I are asked ‘where’s the mother’,” said Dionco. “Being gay is quite accepted in the country, but I think gays with kids is still a new thing for them.”

It is also worth noting that the same survey also found a slightly smaller group, or 63 percent of respondents, said that “it would be shameful to have a homosexual son”.

According to the 2014 report, Cambodian society can be tolerant of male homosexual behavior as long as it is discreet and does not affect traditional family structures. At the end of the day, men are still expected to marry women and have children. Beyond that, sexual relations with other men can go unnoticed or ignored.

Though the general public is rather friendly towards LGBTQIA+, misunderstandings and prejudice will continue if legislation is not enacted.  However, progress has definitely been made.

Dionco believes the openness of the government is on the right track but has also noticed that legislation on same-sex marriages is not forthcoming. “The likes of surrogacy and gay family rights will definitely not be available in the next ten years or so.”

Pockets of acceptance for LGBTQIA+

These pockets of acceptance for LGBTQIA+ that can be seen in Taiwan and Cambodia give the community some reason to hope.

By all accounts, Taiwan will continue moving forward and pushing for more rights for the LGBTQIA+ community. Cambodia, even without legalization, also generally treats the LGBTQIA+ community in a friendly manner – even though there are still problems and misunderstandings that are exacerbated by a lack of legislation or education.

Ultimately, both these places could lead the way towards progress and greater equality, marking the path forward for the rest of the region.