LGBTQIA+ in China and India play a key role in the evolution of the communities throughout the region. No investigation into anything happening in Asia could omit the two giants of the region and the two most populous nations on earth. Attitudes in those two countries on almost any social issue ripple throughout the continent, one way or another.

This is simply a matter of math given China’s population of 1.4 billion and India quickly approaching that mark. Together, the Dragon and the Elephant account for about a third of all the people in the world. Progress or stagnation in the rights and social standing of the LGBTQIA+ community in these two countries have global impact.

WeChat, one of the most popular social media platforms in China, removed dozens of LGBT accounts in July 2021. Mainly run by university students, these include Tsinghua University’s “Purple” and Peking University’s “colorsworld” accounts. When deleted, the accounts simply displayed messages saying they had violated internet regulations and there was no further explanation.

Liu, a 25-year-old homosexual man who did not want to use his full name for fear of reprisals, is a high school teacher in mainland China. He said that, as a matter of course, the community faces a lot of misunderstanding and discrimination, both among families and in workplaces.

“I sometimes try to raise issues about the LGBTQIA+ community with my family and relatives, but they always express disgust and opposition,” said Liu. “Many of my friends are still in the closet and very few people get support from family and friends.”

Liu realized that he is gay when he was in primary school and secretly searched for pictures and videos to test this realization. “My mum caught me and my punishment was kneeling for an entire night.”

Some of Liu’s homosexual friends tend to be more open. They are willing to reveal their sexual orientations and even participate in work events targeted to the LGBTQIA+ community. However, they eventually found their choice to reveal their own sexual orientation actually brought them a lot of problems, like awkward situations on business trips, constant judgment and labels such as “womanish” and “small-minded”.

In recent years, BL (also known as danmei) novels and TV dramas have become very popular in mainland China. The 2019 series The Untamed, staring actors Xiao Zhan and Wang Yibo, was a significant example. The series had been viewed 9.5 billion times on Tencent Video by June 2021.

Liu noted that, while there is more acceptance, “I feel a bit strange about it. I feel like people think homosexuals are something that makes them feel excited and special. I can’t tell if they really are accepting the LGBTQIA+ community.”

However, he thinks the younger generation falls into a different type of misunderstanding, and “higher acceptance” seems to be different from what “equality” should be.

The Chinese government, for its part, has squeezed the air out of the LGBTQIA+ community, particularly in recent years, due to a declining birth rate. The Shanghai Pride parade in 2020 was suddenly canceled without explanation, and all future events were also canceled. WeChat accounts associated with the events were also shut down. Many students were disappointed by these developments, but Liu has a different view.

“I honestly hold an accepting attitude towards this incident. China is trying very hard to increase the birth rate and has been cracking down on various industries,” said Liu. “I am already satisfied if the government can hold an indifferent attitude towards us.”

Looking to future developments, he said, “I am still very optimistic. I believe people are becoming more and more capable of independent thinking, and will not blindly oppose or accept just anything. That is a good turning point for the LGBTQIA+ community’s development.”

“I hope that attitudes towards the LGBTQIA+ community will evolve to the point where we are viewed as normal as drinking water,”

In 2018, a significant legal decision changed the course of the development of India’s LGBTQIA+ community. The Supreme Court read down Section 377 of the Indian Penal Code and decriminalized same-sex relations between consenting adults. Five judges delivered this decision, and one of them, Indu Malhotra, said she believed “history owes an apology” to LGBT people for ostracizing them.

“The reading down of Section 377 was a landmark victory for the LGBTQIA+ community and a positive step in achieving equal human rights for all,” said Gurleen Kaur, a 19-year-old homosexual woman from India currently studying in Hong Kong. “It helped spread awareness in general and opened a platform for many people to come out in a safe way while living in the country.”

“With the reading down, we can no longer say, ‘homosexuality doesn’t really exist in this country’, ‘it’s a western phenomenon’ or ‘the numbers are very small’,” said Anjali Gopalan, the founder and executive director of the Naz Foundation (India) Trust. The organization is at the forefront of the battle against Section 377, which discriminates against individuals based on their sexual orientation.

“These are the excuses we always hear. But from now on, we cannot sweep the issue under the carpet and we recognize that we do have an LGBTQIA+ community in our country. It has opened the door for people to start talking about rights and think about approaching the courts to fight for them.”

India has made rapid progress on issues related to the LGBTQIA+ community in recent years. The focus is not only on homosexuals but also on transgender people, who have long been neglected.

The country has traditionally recognized a third gender population as neither male nor female.  Eunuchs, as well as intersex or transgender people, make up this population. Also known as “hijras”, this group won legally granted voting rights as a third gender in 1994.

“Unfortunately, what happening right now is that the community, except for trans which has some rights, still has no rights,” said Gopalan. “The rights that other citizens take for granted, as basic as the right to marry and the right to inherit… none of these are given to the community.”

But Kaur pointed out that these beliefs do not necessarily extend to the countryside. People in rural areas have little knowledge about the LGBTQIA+ community and think those in the community are either “possessed” or suffering from some kind of “ailment”. Even wealthy and well-educated people can be slow to understand.

Still, Kaur agreed that there is a comparatively accepting attitude in younger generations. “They are aware of the community and trying to popularize their thoughts through social media,” said Kaur. “A lot of millennials have opened up in places that are LGBTQIA+ friendly and a safe space.”

“The activism of the LGBTQIA+ community is growing steadily as more people are becoming aware, especially of gay and trans rights. Activism and the demand for change can largely be seen on social media,” Kaur said. “However, I do believe that this vocalization of change is largely restricted to these platforms.”

Any actual protests or demonstrations to support or lobby for the rights of the community are often unstructured and small. The police can also easily break up these events. Kaur believes that the only sure way for progress is through the courts, saying “I believe that true change can only be achieved through legal platforms.”

She is not too optimistic about the government’s willingness on taking more steps forward. “I believe that the government isn’t bothered about the community and its rights are a rather tertiary priority for the country,” she said. “However, I still believe the ruling party would not make very discriminatory decisions.”

Gopalan also believes change is not necessarily going to come from the government.

“The resistance from authorities is going to be there. I think it’s important for a larger coalition to come together to fight for the rights of the community.”

“It is important to get the courts to make decisions, which is going to make it easier for the legislature to act. I don’t think politicians are particularly interested in bringing about any change for the community,” Gopalan added.

Most importantly, change cannot come from a single group but has to be driven by multiple levels of society.

“If you want to change attitudes, you have to bring change at every level. For example, we have curriculums to train medical doctors, to train nursing professionals, and to train teachers. We must include LGBTQIA+ issues on these. Otherwise, how do we bring changes in attitude?”

In Kaur’s perspective, the most urgent issue for the LGBTQIA+ community in India is related to trans rights. “The trans community needs to be recognized in accordance with their chosen genders and allowed access to their preferred pronouns. They have to be able to exist in the way they want without any judgment,” Kaur said. “A lot of trans people often face a housing crisis alongside sexual assault.” 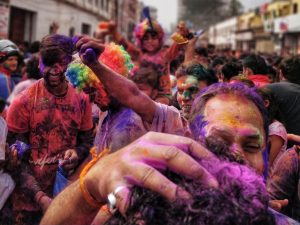 Gopalan is also positive about the future development of the LGBTQIA+ community.

“If I weren’t positive, I don’t think I could do the work that I’m doing now. I remember when they first challenged criminalized homosexuality at court in 2013. I used to say, ‘I don’t think I’ll ever see this change happen in my lifetime.’ But it did happen. This gives me a lot of hope that other changes will also happen,” said Gopalan.

An example of the huge changes that have already happened involves the rights of intersex people, which makes her more confident about the future.

“That’s a huge change, right? When I look over the last twenty-five years, I can see so much more openness. There are so many more voices from the community, which weren’t there earlier. So, I am very hopeful to see more changes coming.”

LGBTQIA+ in China and India: opposite attitudes

Attitudes towards the LGBTQIA+ community in China and India are vastly different. In China, the community faces a more oppressive environment, with tighter policies due to declining fertility. Further development is unlikely in near future.

In contrast, the community in India is seeing more

despite misunderstandings and obstacles, the community in India is experiencing more rapid development and has benefitted from favorable policies. And the community is looking forward to more true change in legal platforms.