An exodus out of Hong Kong has grown. Spooked as much by a spike in the number of COVID-19 cases and deaths as by the prospect of a universal testing program and unpredictable lockdowns, a record number of people left Hong Kong in February 2022.

A total of 94,035 people left Hong Kong that month, according to the Immigration Department. My father and I were two of them.

That, of course, is not a net number. According to Hong Kong’s Immigration Department, a net 93,000 people left the city in 2020 and another 23,000 in 2021. That was before the unpredictable lockdowns and rules that defined 2022. Most estimates and anecdotal evidence suggest that this year the floodgates opened up.

The decision to leave the place I have called home for over 30 years was not easy. And neither was the move, but for unexpected reasons that would have been unthinkable just a couple of years ago.

My family had been discussing moving back to South Korea throughout 2021, it was the Hong Kong’s government’s ban on flights from nine countries, including the U.S., earlier this year that unexpectedly became the trigger. My mother flew to the U.S. in October 2021 to visit family. By the time she was due to come home three months later, as per U.S. immigration rules, there were no actual flights for her to take back to Hong Kong. My family had to scramble to come a plan B.

We decided that it would be easiest for her to do a ‘washout’ in South Korea. This was because it was the only country where she would not have to pay for a hotel for some undefined amount of time. Nobody could predict when the ban would be lifted. It turned out to be months later, on 1 April. Since then, there have been somewhat regular one-week bans on specific routes whenever an airline lands a plane with more than a handful of cases of COVID-19 on board.

As an aside, cancelling my mother’s original ticket to Hong Kong also turned out to be mission impossible compared to pre-COVID-19 times. We eventually decided to book a new, one-way ticket to Seoul and worry about getting refunded later (spoiler: we eventually succeeded but not without some epic bureaucratic gymnastics).

My mother decided that she would make use of her time in South Korea to do some market research, and, with the help of my uncle and aunt was able to find and rent a place for the entire family to live much quicker than expected.

That was the final nudge my father and I needed to begin the prep work to leave Hong Kong.

At first, I thought the biggest challenge would be working through a very long to-do list, but I was wrong.

The gold medal for difficulty went to the challenge of avoiding catching COVID-19 or, more specifically, testing positive for the virus. The number of cases in Hong Kong was soaring.

I purchased several rapid antigen test kits from chain stores such as Watsons and Mannings out of an abundance of caution but was pleasantly surprised that there seemed to be enough stock, even as each customer was limited to two boxes in Watsons case.

I was extremely fortunate that I did not knowingly meet any positive cases as we prepared to leave and was just as fortunate to be able to work from home. Looking at the daily compulsory test notices was the most dreaded part of each day, watching to see if my building or places I had visited were included. Any kind of positive test would shatter our very carefully laid plans and would have forced us to re-arrange everything, starting with our flights.

There was also the question of whether we would even have a flight to board as cases were also high in South Korea at the time.

The best we could do was come up with contingencies, which essentially meant booking a hotel until the next available flight, but that was not an ideal plan. My father described those days of waiting period as walking on eggshells.

Another challenge was finding a moving company. I was eventually able to tap my connections at a Korean-language newspaper in Hong Kong called the Wednesday Journal to get the names of a few companies.

The number of daily cases in Hong Kong on the day we left was 8,674.

I breathed a huge sigh of relief when I got the email telling me that both my father and I had tested negative in a polymerase chain reaction (PCR) test required to travel. We paid extra to take the test the day before our flight at the airport, and I even took two of the rapid antigen tests that I purchased earlier on board with me.

The number of daily cases in Hong Kong hit a record of 72,682 on 4 March, a little over a week after our departure. (Daily cases dropped rapidly after that and fell to just over 200 by the end of May. 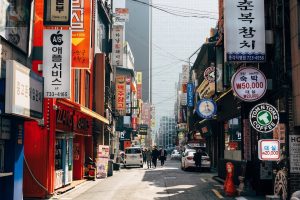 I had not been able to travel outside Hong Kong since October 2019 as a result of untenable quarantine requirements or outright flight bans. In Hong Kong, policy unpredictability has been the constant since the beginning of the pandemic.

So, I did not know what to expect as we headed to the airport. What surprised me most was the long line that had already formed in front of the check-in counters given that it was close to midnight and strict social distancing rules applied. For the past two years, all the pictures of the airport had been of empty halls and bored check in attendants with no travelers to cater to.

“Many of the passengers are transit passengers. COVID-19 has really limited their options to get to their destinations,” the woman who checked us in told us.

Many of the people in that long line seemed to be like us, saying farewell to the place they had long called home.

The flight was “full”, but under the new definition of the term this meant about half capacity.

Once we boarded, the empty seat between passengers was a visible reminder of the requisite social distancing measures. I noticed that barely anyone used the toilets throughout the flight, in contrast with the long lines I used to see pre-COVID. The flight attendants were all in full protective gear and served the in-flight meal in disposable containers.

After our plane touched down in South Korea at 6:30 AM, clearing immigration involved some additional hoops.

The biggest contrast compared to what I had heard about the process in Hong Kong was the lack of a PCR test at the airport itself. This dramatically reduced the time needed to do the test and wait for the results, which could take anywhere between two to four hours according to the Cathay Pacific website.

The first step involved the verification of our PCR test results, with the officer placing a yellow sticker on my passport. Another officer then verified the local contact that all passengers were required to provide in a form handed out during the flight. We were then directed to fill in a quarantine declaration form.

My father and I also underwent two PCR tests, the first on 24 February and the second three days later at a facility a 10-minute car ride away.

A little more than a month after we left Hong Kong, COVID-19 cases started to come down. To the relief of many, the compulsory universal testing program was postponed and would never come to pass.

I am starting to feel more at home in South Korea as I explore my new neighborhood and slowly start seeing family and friends here. Our boxes from Hong Kong also arrived much faster than expected and unpacking them has made the move feel more real.

As I slowly process the fact that I have left Hong Kong and even enjoy life here, I still realize that what I really miss is the people.

• LGBTQIA+ in China and India play a key role – Part 6